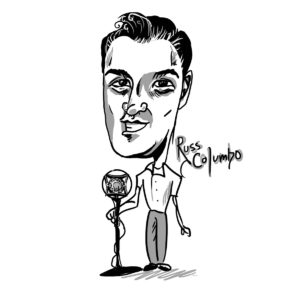 Russ Columbo, the 12th child of Italian immigrants, was primarily a singer, but he was also a violinist and actor—even a composer at times. Some of his songs became famous hits for other legendary performers like Sinatra, Tatum, Bing Crosby, and Lena Horne. He was often compared to Crosby; in fact, many in the business believe that Russ patterned himself after the legendary star. Columbo tried to distance himself from Crosby, stating that he wasn’t a “crooner” (the label often applied to Crosby’s singing style) and put considerable effort into writing and singing songs that he thought would highlight their differences. Columbo debuted as a singer at 13, but even so he would have a very short career due to a very strange accident that took his life when he was only 26 years old. Columbo was in the midst of a widely publicized love affair with Carole Lombard at the time of the accident, which was strongly opposed by Carole’s studio. The complete circumstances surrounding his death remain unclear to this day, but the story is as follows: Columbo was visiting the studio of a friend, and the friend, who was trying to light a cigarette, struck the match on the wooden stock of an antique pistol. The flame set off a charge in the gun, sending a lead ball ricocheting off a table and right into Columbo’s forehead. Even stranger: his mother was very seriously ill at the time and her husband and much of the entertainment world agreed to and successfully pretended that Russ was still alive, even writing her letters and talking about his career until she passed away years later.

Songs from Wake Up and Dream