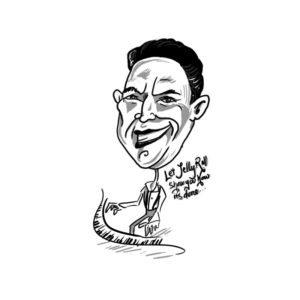 Jelly Roll Morton (birth name Ferdinand Joseph Lamothe) was one of the first jazz soloists, and many consider him to be the first great jazz composer.

He was born in 1885 in New Orleans, and his grandmother raised him in a well-to-do Creole household. He received a quality education, which included piano instruction, studying European classical music, and listening to French opera. By the age of thirteen, he was a great piano player and realized he could make hundreds of dollars a night playing piano in the brothels of New Orleans. His grandmother kicked him out of the house when she found out, and he proceeded to gig throughout North America, from New Orleans to St. Louis, Las Vegas, Los Angeles, Vancouver, Chicago, New York, and back to New Orleans. He recorded some influential albums, particularly with his group The Red Hot Peppers. These recordings set a standard in jazz where a small group plays both as an ensemble and where each member is a highlighted soloist, and blended concepts of composition (working with already existing music) and improvisation (creating music on the spot). Additionally, Morton played with a sense of swing that future musicians emulated.

Jelly Roll Morton developed a national presence and made good money. He didn’t take care of his fortunes, but he loved to show it off with extravagant suits and cars, and having a diamond embedded into one of his teeth. He had a way of upsetting musicians; he would go to music clubs, listen to a pianist, and then tell the pianist to move so that Jelly Roll could demonstrate how it’s really done. He also insisted to have created jazz: “It is evidently known, beyond contradiction, that New Orleans is the cradle of Jazz and I, myself, happened to be the creator in the year 1902.” About the genre, he said, “Jazz music is to be played sweet, soft, plenty rhythm.”

Jelly Roll Morton died prematurely. He was stabbed in a Washington, D.C club and never fully recovered from his injuries. He suffered breathing problems the rest of his life before passing away in 1941. While he was still alive, he was recorded in a series of interviews where he chronicled his music, and these recordings are preserved in the Library of Congress.