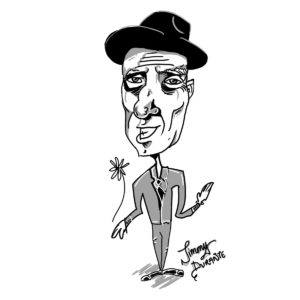 Like many performers of the ‘20s, Jimmy Durante did it all; played the piano, sang, did comedy and acting, and did them well into the 1970’s. He was best known for his stunning nose that was responsible for his famous nickname: Schnozzola. Durante dropped out of school in eighth grade to become a ragtime pianist. He soon joined a famous jazz band, and his habit of breaking into a song or joke in the middle of a song, followed by a musical response from the group, became his trademark. You can see this in the performance with Louis Armstrong by clicking on the video link below. His signature song, “Inka Dinka Doo” was actually composed by Durante himself.

Success in Vaudeville was followed by even greater success in radio during the 1940’s. His first radio appearance in 1933 as a stand-in for a regular star was such a hit that he was immediately offered his own show. Durante was also involved in television from the very beginning, including the NBC comedy variety show “The Big Show,” where he appeared with numerous stars including Fred Allen, Frankie Laine, Ethel Merman, and Danny Thomas. Thomas was the proud owner of a nose to rival Durante’s, so Durante made a standard routine out of accusing Thomas of stealing his nose. Durante also was involved in film; you may have heard his voice as the narrator of the famous Rankin-Bass Christmas special Frosty the Snowman. He did commercials for Kelloggs cornflakes and the Volkswagen Beetle, where he stated that the new Beetle had “plenty of breathing room . . .for da old schnozzola!” You may have heard him singing “As Time Goes By” while watching Sleepless in Seattle, and the same movie closes with his version of “Make Someone Happy.” Durante used to say, “Be kind to people on the way up—you’ll meet them again on your way down.” With typical wit, and in reflection of his early years when he would interrupt the performance to make jokes, he often said, “I hate music, especially when it’s played.” It wouldn’t be right to end this paragraph with anything other than his signature catch phrase “Ha-cha-cha-chaaaaaaa!”