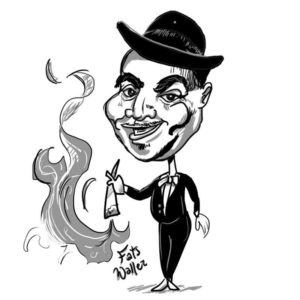 One of the greatest jazz pianists and entertainers
1904-1943

Fats Waller’s original name was Thomas Wright Waller, but he was called “Fats” from an early age. His father Edward was a Harlem lay preacher who wanted his son to pursue a career in the ministry, and Waller played organ for the church as a child. His mother doted on him, but she died when he was a teenager. This was very difficult for him, and he moved in with pianist Russell Brooks and his family. Brooks introduced Waller to James P. Johnson; Johnson, an excellent stride piano player and composer sometimes called “The Father of Stride,” significantly influenced Waller and his music.

Waller performed and recorded extensively in the 1920’s and ‘30s and was one of the most popular musicians of the time. He played and sang as a soloist and with the smaller group Fats Waller And His Rhythm. He was very important as a jazz pianist and was the first prominent jazz organist. Songwriting came very easily to him; bandleader Fletcher Henderson once treated Waller to lunch, offering to buy him a hamburger in exchange for a song. Fats wrote ten songs for ten hamburgers. Waller’s showmanship often overshadowed his talent. His talking during the end of a recording became something of trademark, and exaggerated facial expressions during performances amused audiences.

Unfortunately, Waller was bad with money—he spent some time in jail for not paying alimony—and he had a drinking and eating problem. The combination of an unhealthy lifestyle, legal stress, and a heavy touring schedule hurt his health, and he died of pneumonia while traveling.

Two of Waller’s best-known songs, “Ain’t Misbehavin’” and “Honeysuckle Rose,” were inducted into the Grammy Hall of Fame. He said about music: “You get that right tickin’ rhythm, man, and it’s on!”