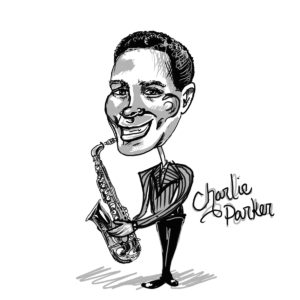 The music and influence of Charlie Parker can be summed up in his own words: “There is no boundary line to art.” Charlie Parker is one of the primary founders of modern jazz, including the Bebop.

He explored the boundaries of melody, rhythm, and harmony on his saxophone and in his compositions. His motto could be said to be learn, practice, and forget. He said, “You’ve got to learn your instrument. Then you practice, practice, practice. And then when you finally get up there on the bandstand, forget all that and just wail.” It was during those times of forgetting up on stage that the music of Charlie Parker was born.

Parker didn’t start playing the saxophone until age 11. He was born and raised in Kansas City, so he was influenced by the music of Count Basie and Bennie Moten at an early age. Parker started performing with various groups while holding several other jobs. One of the jobs was as a busboy making $9 per week at a restaurant where he heard the music of Art Tatum. Later he would play with Earl Hines, and collaborated with Dizzy Gillespie, Thelonious Monk, and learned from Maury Deutsch.

Parker brought an intellectual element to his jazz. Many of his contemporaries of the time saw the traditional Big Band music as too cautious and restrictive. They didn’t feel it reflected the experience of urban society. Bebop was born out of the search for music that reflected that aspect of life, and according to Parker, “If you don’t live it, it won’t come out of your horn.” His music spoke to the difficulties and frustrations of urban life during those times. This music features asymmetrical rhythms, long complex melody lines, and new chords. Unfortunately, his lack of boundaries also included portions of his personal life, and drug and alcohol abuse cut short his life at age 34.