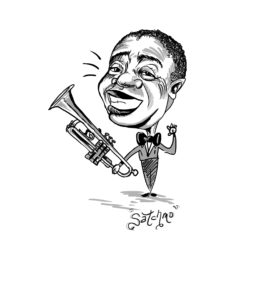 Louis Armstrong, one of the most important figures in jazz, is still remembered decades after his death for songs like “Hello Dolly” and “What a Wonderful World.” Time magazine includes him among the most influential Americans of all time. But he came from humble beginnings.

Armstrong grew up in New Orleans and started working at a young age to help support his family, dropping out of school in fifth grade. His father deserted the family shortly after Louis’ birth, and his mother often had to resort to prostitution. His first music instruction came at the Colored Waif’s Home for Boys, where he was sentenced for firing a gun on New Year’s Eve as an 11-year-old. As he got older, he moved across the country, playing with the premier bands of New Orleans, Chicago, and New York City. He appeared on dozens of albums, included backing up Bessie Smith. He moved back to Chicago and recorded a huge number of albums with his own bands, Louis Armstrong and His Hot Five and Hot Seven. These records are some of the most important in early jazz history; they were improvised, with New Orleans musicians playing New Orleans-style music.

Armstrong continued to record and perform. In the 1950’s and ‘60s, he played all over the world, serving as an international ambassador of swing. In the last years of his life, he knocked the Beatles off the top of the pop charts with “Hello Dolly” (no jazz recording since has ever topped the charts) and recorded “What a Wonderful World,” a song inspired by his home in Queens. He said, “The memory of things gone is important to a jazz musician. Things like old folks singing in the moonlight in the back yard on a hot night or something said long ago.”

He played with a hot, flashy style and sang with a sound completely his own. He was nicknamed “Satchmo,” an abbreviation of Satchelmouth, for his large mouth.

“What a Wonderful World”