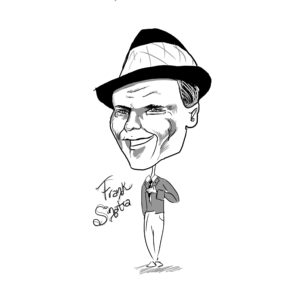 Frank Sinatra, one of the most popular singers of the twentieth century, was born in New Jersey in 1915 to Sicilian immigrants. Bing Crosby’s singing greatly influenced Sinatra, and Sinatra dropped out of high school to become a singer. His first big break came with the Major Bowes Amateur Hour, a show where performers competed for a prize and the chance to perform with Major Bowes throughout the country. He also found work singing for radio shows before even bigger breaks singing with the Harry James and Tommy Dorsey big bands; this was the era of swing, and Sinatra, who started as a crooner (an emotional singer), developed an energy, a sense of swing, a swagger while performing.

In 1943, Sinatra signed with Columbia Records as a solo performer. By this time, a series of successful concerts started Sinatramania; teenage girls were obsessed with the singer portrayed as the shy, Italian-American kid who made it big. He had a string of hits, was performing up to 45 times a week, and starred in films. But by the late 1940’s, his career slumped. His image suffered with news of his affair with Ava Gardner and the end of his first marriage, and he sporadically suffered from voice problems. But these setbacks set up one of the greatest comebacks in show business history. He relentlessly lobbied for a role in the film From Here to Eternity, a role which earned him an academy award for Best Supporting Actor. This sparked non-stop recording, performing, and acting. He was no longer the shy, swooning kid, but rather the brassy swinger. He said of himself: “I’m not one of those complicated, mixed-up cats. I’m not looking for the secret to life… I just go on from day to day, taking what comes.” He was leader of the Rat Pack, a group of performers in the 1950’s and 60’s who included – among many others – Dean Martin, Sammy Davis, Jr., Judy Garland, and Shirley MacLaine.

Sinatra was a perfectionist; while still developing his breathe control, he studied how Tommy Dorsey breathed while playing trombone, and he would practice staying underwater to increase his lung capacity. He is remembered as one of the most captivating performers of the twentieth century, with an impressive vocal range and an energy that was contagious to everyone he played with. He turned lyrics into sung stories, and the songs he sang became a major part of the American songbook.

“Come Fly With Me”