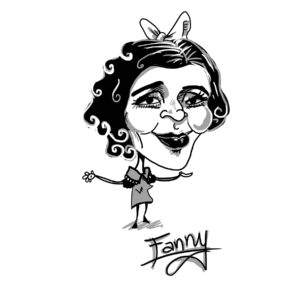 Like many performers of her time, Brice did it all; singer, actress, comedian, and radio personality. Her father was a bartender and her mother worked in a factory. Marital problems caused the family to separate, and as a result Brice ended up in New York, settling in Brooklyn. She got her start in a talent contest when she was 13 and won first prize for the song “When You Know You’re Not Forgotten by the Girl You Can’t Forget.” She left school to pursue a career in the music industry, but she failed in her first attempts. She ended up singing in a burlesque house, which was the least competitive performance venue at the time, and was discovered there by Ziegfeld who made her a star in his famous Ziegfeld Follies that same year.

Brice relied on the response of the audience rather than her directors. She said, “Your audience gives you everything you need. They tell you. There is no director who can direct you like an audience.” She experienced the typical amount of upheaval in her personal life that often seems to follow performers. She was married three times. Her second husband, also the father of her two children, served three years in a penitentiary and disappeared when he was released. Her successful career earned her the Grammy Hall of Fame award for her hit single “My Man,” and a star on the Hollywood Walk of Fame. Thirteen years after her death she was portrayed by Barbara Streisand in Funny Girl, the hit musical about her life.

“It’s Gorgeous to be Graceful”

Brice as an opera diva