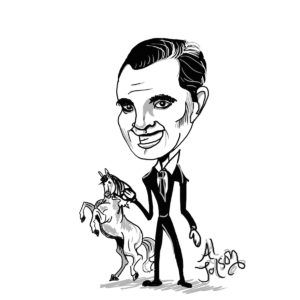 Al Jolson was a man of “firsts.” Born in Lithuania, he immigrated to the United States with his parents when he was still a young child. His singing career began at the age of twelve when he and his brother entertained the troops during the Spanish-American War. Known for his extraordinary charisma and connection with the audience, it’s no surprise that his Broadway career spans almost 30 years. Jolson said, “A responsive audience is the best encouragement an actor can have.” Jolson was the first musical artist to sell more than 10 million records, and is best known for his appearance in one of the first “talkies,” called The Jazz Singer. He had more than 20 No. 1 hits and one of his signature tunes, called “Sonny Boy,” was the first recording in America to sell three million copies. He had his own show in 1947, and despite the fact that his competition included the likes of Frank Sinatra and Bing Crosby, Jolson was voted the Most Popular Male Vocalist in 1948. He was also the first Broadway performer to earn $10,000 per week and one of the first faces on television. He had a tremendous amount of energy on stage, is noted for performing with live horses in the 1925 show Big Boy, and was an amazing whistler as well. He could literally sound like a songbird that had flown into the theater and joined the performance.

“Let Me Sing and I’m Happy”