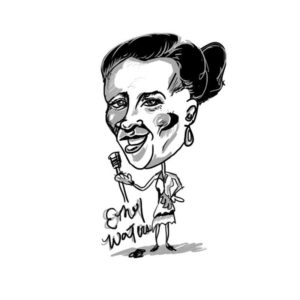 Ethel Water’s early life was extremely challenging, but compared to many other legendary performers, she went on to lead a happy, successful, long life. She was born as a result of her mother Louise being raped as a teenager; her father, a pianist, had no role in Ethel’s life. They lived in poverty, and Waters was 12 years old when she married for the first time; at age 13, she began working as a chambermaid and sang at a local nightclub. She also sang and danced in the streets to earn money.

Waters started dancing with a Vaudeville troop and became known as Sweet Mama Stringbean; she was exceptionally tall and skinny. She danced well, but after a car accident limited her dancing abilities, she focused on singing. She had a unique voice that combined elements of “proper” Broadway singing and “raw” blues singing. She scooped into and dropped off of pitches and sang around the beat, but she also sang with a clear sense of diction and pitch.

Waters continued to perform in concert, on Broadway, and on the radio, and towards the end of her career, she toured with evangelist Billy Graham, singing gospel songs. “His Eye Is on the Sparrow” was one of her favorites. Looking back on her upbringing, she said, “Mom never quit on me. My only regret is that she didn’t live long enough to share some of the money and comforts my work in show business has brought me.”

Ethel Water’s pivotal recordings include “Am I Blue?” “Stormy Weather (Keeps Rainin’ All the Time),” and “Dinah.”

“His Eye Is on the Sparrow”