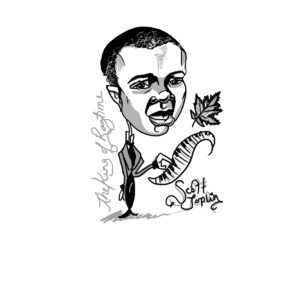 Scott Joplin is the only performer in this course whose performances we can’t hear. He lived before recording technology was widespread, although we can hear recordings of piano rolls (a roll of paper that operated a piano player) that he made. But while we can enjoy a Joplin performance, his ragtime piano pieces are still widely known even a century after his death.

Joplin was born in Texas in either 1867 or 68 (many people of this time didn’t know their exact date of birth). His father was an ex-slave; he played violin around the house, but he was also absent for long periods of time. Joplin’s mother provided for the family by cleaning homes. She took Scott with her, and when the house had a piano, he would plunk out tunes from church. He began studying with a local German piano instructor who introduced him to European classical music.

Joplin realized he could help the family by playing piano at brothels and dance halls, and performed in Sedalia and St. Louis, MO; he also traveled to Chicago to play during the 1893 World’s Fair. While playing in Sedalia, he met music publisher John Stark, who offered him a music royalty to compose. Joplin composed ragtime music, or rags. They were very syncopated and sounded “ragged” or jerky. Joplin was familiar with the blues, and he combined that sense of syncopation with a European sense of form and harmony, structuring them similarly to military marches. He composed a rag a week and made a living from royalties, teaching, and performing.

Joplin composed until the end of his life, but his mental health deteriorated due to syphilis. He could no longer keep up his piano technique and his memory suffered; he died at age 49 in a state mental institution. Decades after his death, his “Maple Leaf Rag” was still well-known, but it was the 1973 film The Sting, which included several Joplin rags, that renewed popularity and acclaim for Joplin’s music. While he certainly saw success during his own lifetime, he said about his music, “When I’m dead 25 years, people are going to begin to recognize me.”