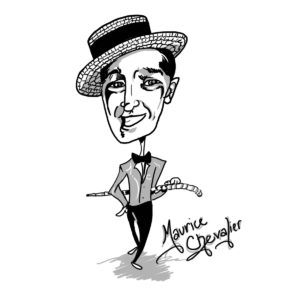 Maurice Chevalier was a French singer and actor. At age 11, he left school for a career as an electrician and then as an acrobat; after an injury, he focused on becoming a singer and actor and performed song-and-dance routines in French music halls and cafes. He served with the French Army during World War I and was captured. American and British soldiers in his prisoner of war camp taught him how to speak English, a skill that helped him find future success in the United States.

After World War I, Chevalier performed in music halls, silent films, and theater productions, and began working with Paramount Pictures in 1928. In his first Hollywood film, Innocents of Paris, he sang “Louise,” which would became his first hit in the United States and remained a popular song of his throughout his career. He moved back to France before World War II, and during the war, he performed in Germany in exchange for the release of French prisoners of war.

After World War II, Chevalier performed all over the world as a one-man show. He resumed his Hollywood career in the 1950’s and received an Academy Honorary Award in 1958; he also appeared on television as himself on the The Jack Benny Program and The Lucy-Desi Comedy Hour. In the last decades of his career he adopted the role of the distinguished, older French gentleman. About aging, he said, “The French are true romantics. They feel the only difference between a man of forty and one of seventy is thirty years of experience.” He gave his final performances in 1968. He died in 1972 at the age of 83. His last contribution to film was singing a song for the 1970 Disney film The Aristocats, and he is remembered for paving the way for international performers to find stardom in the United States.