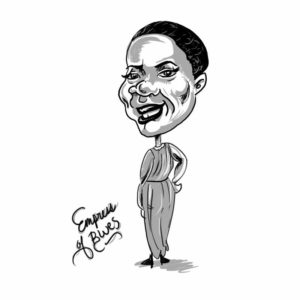 Bessie Smith, one of seven children, was orphaned at the age of 7. From then on, she supported herself by singing and dancing on street corners. As a young teenager, she started working with Ma Rainey, one of first professional blues musicians, and sang for her Rabbit Foots Minstrels tent show. She had a powerful voice that could project throughout a tent. From there, Smith sang in cabarets, other touring minstrel shows, and the 81 Theatre in Atlanta.

Smith started recording in 1923 when a representative of the Columbia Phonograph Company happened to hear about her. Columbia was beginning to produce “race records” (records of African Americans performing blues, jazz, and gospel), and her recordings were very successful. She was the best-selling black artist of her time, and she sang to large audiences throughout the northern and southern United States, to both black and white concertgoers. She starred in the 1929 film St. Louis Blues, named after her 1925 hit song.

The Great Depression hit, Smith’s singing went out of style, and alcoholism made her unreliable, which hurt her career. Her last recording, marketed towards the growing jazz audience in Europe, was made in 1933, featuring Jack Teagarden and Benny Goodman. She was again performing regularly in 1936, but died in 1937 from injuries sustained in a car accident.

Bessie Smith had a low voice and relatively narrow range, but sang with attitude, feeling, soul, and bluesy inflections. She had clear intonation and could sing with a variety of expression. Later singers like Janis Joplin and Aretha Franklin would emulate her vocal styles, and in the late 20th century, the Grammy Hall of Fame, Rock and Roll Hall of Fame, and the Library of Congress National Recording Preservation Board recognized her music and legacy.