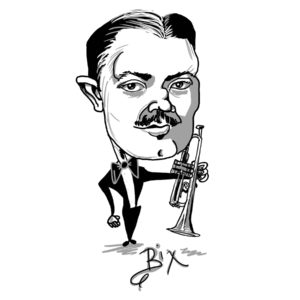 Beiderbecke is remembered for his piano and trumpet/cornet playing. Most jazz trumpet players cite one of two main influences: the hot, flashy Louis Armstrong or the cool, thoughtful Bix Beiderbecke.

The Beiderbecke family was Midwestern upper-middle class. The parents weren’t professional musicians, but music was often heard in the home. They sent him to study at the Lake Forest Academy. While his family disapproved of jazz, the school was near a train station, and the young Beiderbecke spent his nights taking the train to Chicago to hear Bessie Smith, Ethel Waters, and Louis Armstrong. School absences and drinking eventually got him kicked out of school, and he moved to Chicago to pursue a career in music.

In 1924, he played with the Wolverines; his playing elevated them to one of the best white jazz groups of the era. He later played with the bands of Jean Goldkette and Paul Whiteman. Unfortunately, the combinations of hectic touring schedules and Beiderbecke’s alcoholism took a toll on his health, and he died at the age of 28.

Beiderbecke’s solo piano playing and compositions are known for being harmonically rich and complex, incorporating whole tone scales and advanced harmonic ideas. As a cornet player, he played in ensemble settings and needed to fit within a more traditional style, but this made him play in a cool, restrained, thoughtful manner, which, along with his unique tone, set him apart from other cornet and trumpet players. When discussing jazz, he said, “One of the things I like about jazz, kid, is I don’t know what’s going to happen next. Do you?”