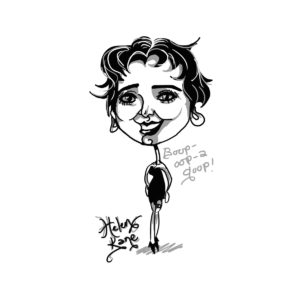 Helen (nee Schroeder) Kane was born in the Bronx. As a teenager, she performed with the Marx Brothers and saw success with Vaudeville. She rose to stardom in 1928 with her recording of “I Wanna Be Loved By You,” where she added the phrase “Boop-boop-be-doop!” with a baby voice. It strongly resonated with the 1920’s flapper culture, and in some ways, epitomized her entire career. She provided the inspiration for the iconic cartoon Betty Boop.

While she was strongly associated with her catchphrase and the ensuing cartoon, she continued to enjoy a diverse showbiz career. She starred in the films Sweetie (1929), Paramount on Parade (1930) and Heads Up (1933), and the Broadway productions A Night in Spain (1927) and Shady Lady (1933).

Kane’s career waned during the Great Depression, but she returned to film in 1950, singing dubbed vocals over Debbie Reynolds to “I Wanna Be Loved by You.” She also performed live and appeared on The Ed Sullivan Show. She battled breast cancer in the 1950’s and ‘60s before passing away at the age of 62.

“I Wanna Be Loved by You”