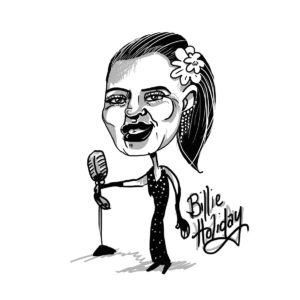 Even though Billie Holiday’s life was filled with hardship, she managed to become one of the greatest voices in all of jazz. Named Eleanora Fagan at birth, her mother Sadie was a teenager, and her father, Clarence Holiday (a successful jazz musician who played with Fletcher Henderson) was absent in their lives. “I never had a chance to play with dolls like other kids,” Holiday said. “I started working when I was 6 years old.” At times, both she and her mother resorted to prostitution.

As a child, Holiday was confined to the House of Good Shepherd for Colored Girls, where she had been placed for truancy and for being a victim of statutory rape. Music brought her comfort in her difficult life, and she loved to sing along to recordings of Bessie Smith and Louis Armstrong. As a teenager, she found work singing in the clubs, speakeasies, and brothels of New York City. She would move from table to table, improvising a different melody on each chorus. With her strong personality, she earned the nickname “Lady,” and began calling herself “Billie” after the actress Billie Dove.

In 1935, she appeared on film with Duke Ellington in Rhapsody in Black and sang on her first of more than 100 recordings. She sang like a jazz musician, singing behind the beat, recomposing melodies, and adding all sorts of colors and inflections. She would often hold part of a phrase and catch up with the rest of it in the next few beats. As she became more popular, she worked with Count Basie, Artie Shaw, and Louis Armstrong.

She faced significant racism throughout her career. In the North, she was told not to mingle with white audiences. In the South, hotels and restaurants refused her service. She was also told to wear lighter or darker make-up, depending on the skin color of her accompanying musicians, to more closely resemble their skin color. The 1940’s and ‘50s saw Holiday battle heroin addiction and alcoholism, and serving time in prison for possession. She was still successfully performing, albeit with a voice that grew rougher from her lifestyle. She performed for the last time in New York City in May 1959, and died in a hospital two months later from her addictions.

Decades after her death, she is still considered among of the best (if not the best) jazz vocalists of all times, with a voice uniquely her own. “If I’m going to sing like someone else, then I don’t need to sing at all.” She was inducted into the Rock and Roll Hall of Fame in 2000.