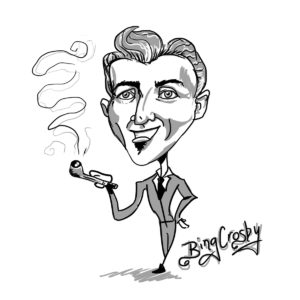 Harry Lillis Crosby, known as “Bing” (a nickname taken from one of his favorite comic strips) planned on being a lawyer. However, he dropped out of Gonzaga University during his senior year to pursue a music career.

As a child growing up in Washington, Crosby played drums and sang with smaller jazz groups. He moved to Los Angeles and formed a duo with friend Al Rinker: Two Boys and a Piano, which became a popular Vaudeville act on the West Coast. Crosby became one of the most successful singers of his era through his presence in a variety of formats (radio, television, film, recordings), singing popular tunes as a crooner with an inviting, conversational, smooth, and relaxed style. While previous singers sang at you, Crosby sang to you, and future singers emulated his style. And while he didn’t have the look of the typical handsome lead, audiences loved his calm, charming demeanor.

Beyond his singing style, Crosby made significant impacts in popular culture. His films with Bob Hope helped establish the genre of the buddy picture. He joked about Hope, “There is nothing in the world I wouldn’t do for Hope, and there is nothing he wouldn’t do for me… We spend our lives doing nothing for each other.” He starred in nearly 50 films and it is estimated his recordings sold at least 300 million copies. He helped pioneer the use of magnetic tape in the recording industry and his insistence in recording his radio shows instead of live broadcasts helped make recorded radio broadcasts standard. Decades after his death, he is still known for his Christmas specials and songs, particularly his performance of Irving Berlin’s “White Christmas” (the best-selling single of all time) and his duet of “The Little Drummer Boy” with David Bowie.