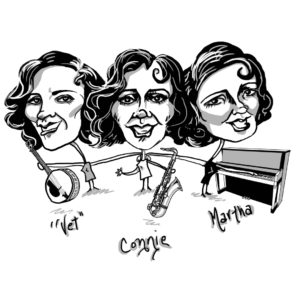 The Boswell Sisters were raised in New Orleans with a very musical upbringing. Their father had performed in Vaudeville and the family attended many live performances in a wide variety of styles; the sisters were classically trained, but they also saw the best black musicians in town and immersed themselves in jazz, blues, and Southern gospel. The sisters learned how to play numerous instruments and began performing as “The Boswell Sisters” in the early 1920’s. They sang together with tight-knit harmonies and accompanied themselves: Martha played piano, Helvetia played violin, guitar, and banjo, and Connie played cello, saxophone, trombone, and guitar.

The sisters performed at Vaudeville venues and, after some successful recordings, relocated to New York. They toured and appeared on radio, film, and record. Their New York recordings featured top jazz musicians, including legendary performers Joe Venuti and Eddie Lang; the sisters, Connee in particular, continued to arrange the music.

In 1936, Martha and Helvetia retired from show business to focus on their families. Connee, despite needing a wheelchair since childhood, continued her music career as a successful soloist through the 1950’s. She would perform with Bing Crosby and influence future singers, including Ella Fitzgerald.

“The Object of My Affection”