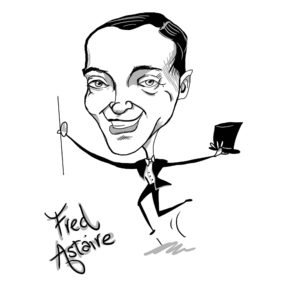 Fred Astaire is one of the most famous entertainers of all time. Which is remarkable, since after his first screen test in 1933, the memo from the testing director of MGM said, “Can’t act! Slightly bald! Can dance a little!” This director could not have been more mistaken. Astaire began his career at the age of 5, performing with his sister alongside many other Vaudeville acts. His full career spanned 76 years. His most famous pairing was with Ginger Rogers, but he also worked with great composers like Irving Berlin, George Gershwin, and Cole Porter. If you watch Astaire dance, you may notice that when he had his arms outstretched he would often bend his two middle fingers towards his palm. It turns out he did this because he thought his hands were too big so he tried to disguise it in this way. The lesson here is that even the most successful of people can be insecure about something. In describing his own dancing, Astaire said, “I just put my feet in the air and move them around.” He also said that “dancing is a sweat job” and, “The higher up you go, the more mistakes you are allowed. Right at the top, if you make enough of them, it’s considered to be your style.”

The video for Lionel Ritchie’s song “Dancing on the Ceiling” includes the same camera shot that Astaire employed in the movie Royal Wedding. The technique makes it look as though Astaire was dancing around a room, literally, including up the walls and upside down, on the ceiling. This illusion is created by fixing the camera to the set and literally turning the room, and with it the camera, while he dances. If you watch “You’re All The World to Me” on YouTube you can see Astaire pause and set himself up at each point where he needs to move to the next surface as the room rotates around.

P.S. Astaire kept that memo over the fireplace of his Beverly Hill’s home.

“You’re All the World to Me”