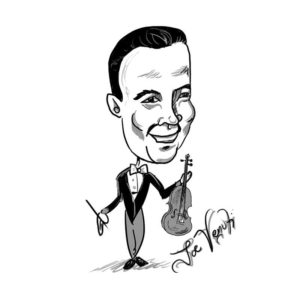 Besides being known as the most important violinist in early jazz, Venuti is remembered as a practical joker. He once hired dozens of bass players to meet him at a busy New York street corner simply to see the chaos unfold; the number of musicians (and their large instruments) blocked traffic. He also enjoyed providing incorrect information on his background, resulting in different listings of his year of birth and country of origin. He was most likely born in 1903 and grew up in Philadelphia. He learned about music from his grandfather and studied violin, and he began collaborating with guitarist Eddie Lang.

Venuti moved to New York in 1925, where he and Lang were in high demand and played with the leading white jazz musicians of the late ‘20s and early ‘30s (a time of segregation), including Benny Goodman, Bing Crosby, and the Boswell sisters. The two recorded a number of influential violin and guitar duos; these would particularly inspire Django Reinhardt and Stephane Grappelli in Paris.

Lang suddenly died in 1934, and Venuti’s career slowed considerably. He led a somewhat successful big band until 1943 and then toured with small groups, but he was no longer a major figure and suffered from alcoholism. However, after a celebrated performance at the Newport Jazz Festival in 1968, he returned to prominence in the jazz world and recorded with important jazz figures in the last decade of his life.

Venuti played with a hot, swinging, virtuosic style and sometimes adjusted his bow so that it wrapped around the strings, allowing him to play chords with a wild sound. “If you’re going to make a mistake,” he said, “make it loud so everybody else sounds wrong.”