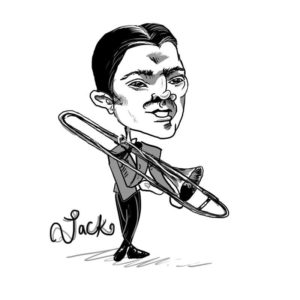 Jack Teagarden was born in Texas; his mother gave him piano lessons at age 5, and he started playing trombone at age 10. By the time he was a teenager, he played professionally with local Southwest bands. He relocated to New York, and compared to other white musicians there, he was particularly skilled at playing the blues; he grew up with black people and heard spirituals, work songs, and the blues from an early age.

In New York, he played with Louis Armstrong and as part of Paul Whiteman’s band. He also had a short-lived after-hours gig with the Three T’s, playing with his brother Charlie and saxophonist Frankie Trumbauer. He started his own big band; musically, it was well regarded, but it bankrupted Teagarden in 1946. He joined Louis Armstrong’s All Stars in 1947, and from 1951 until his death, he led small music groups.

Teagarden taught himself how to play the trombone, resulting in a very unique style. He played in the higher register of the instrument, and his solos were detached from the beat. He was also accomplished as a jazz singer. He singing was simpler than his trombone playing, but it had a warm, laid-back, bluesy sound. He said about his music: “All that I’ve played, all that I’ve sung, I couldn’t have done any other way.”

Teagarden also appeared in the 1941 film Birth of the Blues and an episode of The Andy Griffith Show.