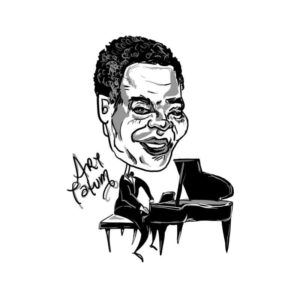 Art Tatum, the man was said, “There is no such thing as a wrong note,” was an amazing African-American jazz pianist whose technique impressed not only jazz musicians but also classically trained pianists. Both Sergei Rachmaninoff and Vladimir Horowitz claimed he was the greatest piano player in any style, and Gershwin was a huge fan as well. A French poet once called him “a crazed Chopin.” Tatum did not consider himself a classical pianist, but one of his most famous works is his own version of the “Humoresque” by Antonin Dvorak. Tatum was nearly blind, and learned to play almost entirely on his own by copying piano roll recordings that his mother played, and he did all of this by ear at the age of 3! Many jazz pianists since have tried to emulate his style and techniques with limited success. By the age of 6, he was playing music designed as duets, completely unaware that the music was written for two players. Some musicians believe that this helped Tatum developed his fast playing style. His first recording, “Tea for Two” would become his signature piece for life. Tatum’s influence was not limited to just piano players; legendary performers Coleman Hawkins (voice) and Charlie Parker (sax) both tried to translate his fast-moving melodic lines with their own instruments. Many of his harmonies and chord voicings were ahead of the time and would be adopted into Bebop many years later. In what may be the most unique honor ever, an MIT student recently coined a term that is now used in the field of computational musicology called “The Tatum.” The term refers to the smallest time unit that can be perceived in music.