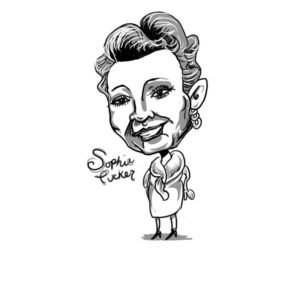 Originally named Sonya Kalish, Sophie Tucker was born in Russia. Her family moved to Connecticut and opened a restaurant, where Sophie sang for tips. As a teenager, she married and had a child, but she was fascinated with performing. She and her husband separated, their child was left with a family member, and Sophie moved to New York to find success as a performer.

Tucker found work performing with Vaudeville. However, producers told her she was “too fat and ugly” to appear as herself on stage. They had her perform in blackface, the practice of white performers trying to look black, or black performers exaggerating the darkness of their skin. It was not until the end of the 1930’s that widespread public opinion recognized blackface as racist. However, after losing her luggage (which included her make-up) on tour, she was allowed to appear as herself. She was a hit and no longer performed in blackface. With her new stage image, she embraced being overweight with humor and innuendo, singing songs like “I Don’t Want to Get Thin” and Nobody Loves a Fat Girl, But Oh How a Fat Girl Can Love.” She said, “Gradually, at the concerts, I began to hear calls for ‘the fat girl.’ Then I would jump up for the piano stool, forgetting about my size, 145 pounds at age 13, and work to get all the laughs I could get.”

In 1911, Tucker made her first recording of the song “Some of These Days,” a hit that became associated with her; she recorded that song several times throughout her career. When Vaudeville waned in popularity, she appeared in radio, television, and film and toured Europe, performing for King George V and Queen Mary in London in 1926. She had her own radio show in the late 1930’s, and appeared numerous times on The Ed Sullivan Show towards the end of her career.

Tucker performed until her 1966 death from lung cancer. She is still remembered for her powerful voice, humor, and boldness.

“Some of These Days”