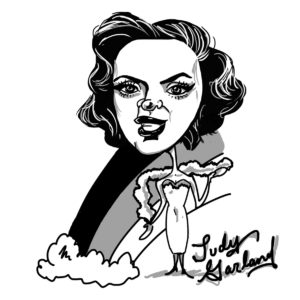 Judy’s parents, Frank and Ethel Gumm, met in Superior, WI at the Parlor Theater. Her mother played piano, and her father was a singer and manager. Judy began her life as Frances Ethel Gumm and got her start in show business when she was only 2 years old, singing “Jingle Bells” on stage at her parent’s theater. She was so thrilled with the applause that she sang the song five times before her Dad carried her off the stage. Her family relocated to California while she was still a young girl, and Judy and her two sisters, Mary Jane (Suzy) and Dorothe Virginia (Jimmie), continued to find work in the theater. Judy said, “I was born at the age of 12 on an MGM lot,” which is when her name was changed to Judy Garland.

After a string of minor roles, Garland’s big break into show business came when she was cast for the leading role of Dorothy in the Wizard of Oz. About the role Garland said, “I’ve always taken The Wizard of Oz very seriously, you know. I believe in the idea of the rainbow. And I’ve spent my entire life trying to get over it.” Many famous song writers wrote songs with Judy in mind, among them Irving Berlin, Cole Porter, and Ira Gershwin.

After her success in the Wizard of Oz, she performed in numerous productions with a wide variety of stars. At that time, many stars were given both amphetamines and barbiturates to help them keep up their energy during rigorous performance schedules. Unfortunately, this practice led to a lifelong struggle with addiction that eventually caused her death. Throughout her life, Garland believed that one should “Always be a first-rate version of yourself, instead of a second-rate version of somebody else.”

“Somewhere Over the Rainbow”