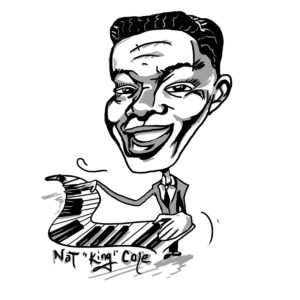 Nathaniel Adams Coles is more widely known as Nat “King” Cole; the stage name most likely referenced the nursery rhyme Old King Cole. He was born in Alabama, and at the age of 4, his family moved to Chicago. His father was a pastor, and Cole sang with the choir and played organ by the age of 12. As a teenager, he dropped out of school to pursue a career as a jazz pianist.

Cole led The King Cole trio in the 1930’s and ‘40s. The trio often sang in unison, but the recordings of Nat singing as a soloist became hits. While he was an accomplished jazz pianist, he focused on singing, which is regarded as among the best of the era. His recordings sold widely among both black and white audiences; he was the first black jazz musician to host his own radio show. Regarding race, he said, “I may be helping to bring harmony between people through my music.” His voice had a soft, liquid sound, and his diction and rhythm were impeccable. “I started out to become a jazz pianist; in the meantime I started singing and I sang the way I felt and that’s just the way it came out.” His recordings were so successful that Capitol Records built an office building called “The House That Nat Built.”

Cole died at the age of 45 after ulcer problems and lung cancer; he was a heavy smoker, and many photographs of him include a cigarette in hand. However, he had posthumous success in the 1990’s when his daughter, pop singer Natalie Cole, created a Grammy-winning version of her father’s song “Unforgettable,” where she sang a duet with his original recording.