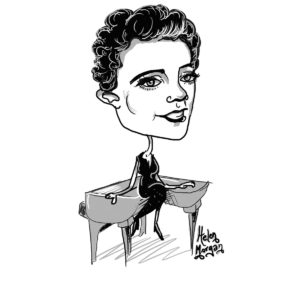 A native of Illinois, Helen Morgan started her career singing in Chicago clubs and winning beauty pageants. Prohibition-era mobsters took an interest in her and financed her own clubs, which she operated and performed in. She also studied vocal performance in New York at the Metropolitan Opera.

School, and rotated between singing in New York and Chicago speakeasies and playing smaller roles on Broadway.

As her performance trademark, Morgan sang while sitting on the piano. This started from necessity; there wasn’t enough room in the packed club for her to stand. But the crowds loved it, so she continued. She was a “torch singer,” singing sad songs about lost or unrequited love, but her style and voice—classically trained, not as low, and comparatively thin—was starkly different from other torch singers of the time. It sounded vulnerable, especially as she mournfully sang from the top of a piano, and audiences empathized.

Her greatest success came in 1929 with the original Broadway production of Show Boat; in it, she sings the torch song “Can’t Help Lovin’ Dat Man.” She also starred in the 1936 film version of the musical, her last film appearance.

Alcoholism took a toll on Morgan; she collapsed on stage in 1941 and died from liver damage in Chicago that same year.