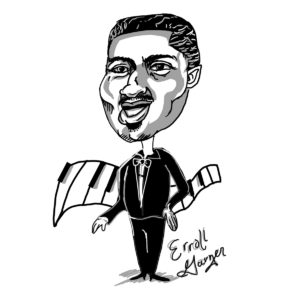 Garner was born in Pittsburgh in 1923 and began playing piano at the age of 3. He was a self-taught player who played entirely by ear. He never learned how to read music, but had an incredible memory of songs he had learned. Before he was a teenager, he performed on riverboats; in his twenties he played on Charlie Parker’s Cool Blues recordings.

He was influenced by Fats Waller’s rhythmic stride piano playing and is often compared to Art Tatum (another pianist from the same era considered among the best jazz pianists of all time). Both Tatum and Garner attacked the piano when playing, but Tatum’s playing was swingier, while Garner’s was funkier. Garner used a style of playing still common today called “locked hands,” where hands move up and down in the same general position. But he also played in a style all his own: his left hand kept the beat like a rhythm guitar while his right hand played slightly behind the beat.

In addition to his unique style, he was quite the showman. His trademark grunt could be heard in concert and on recordings, and was fun to watch. He was especially short (5’2), and would play this up in performance and on television, asking hosts of shows to lend him phone books to sit on to reach the piano. That, combined with his sharp attire and glowing personality on television, made him stand out among other jazz pianists. “I always play what I feel. I always feel like me, but I’m a different me every day. I get ideas from everything. A big color, the sound of water and wind, or a flash of something cool. Playing is like life. Either you feel it or you don’t.”

Garner was a prolific recorder, sometimes recording three albums in a single day (all on the first take, and from memory). His song “Misty” is a jazz standard, and his 1958 live album Concert By the Sea is one of the most commercially successful and critically acclaimed jazz albums.