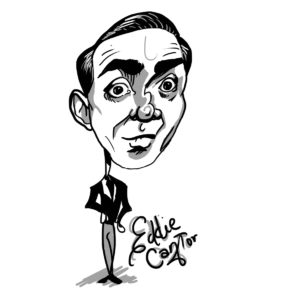 Eddie Cantor was born in New York City to Russian immigrants. From the age of 2, he was raised by his grandmother, who didn’t always know what to do with the energetic kid. He started signing on street corners and left school at 13; a few years later Cantor performed in his first Vaudeville show.

After touring with Vaudeville acts, he found better work with Florenz Ziegfeld’s Follies and starred in Broadway revues (shows that combined music, dance, and sketches) and films. He reached stardom after his performance in the 1930 screen musical Whoopee!

Cantor’s performance often included him in blackface, the practice of white performers trying to look black, or black performers exaggerating the darkness of their skin. It was not until the end of the 1930’s that widespread public opinion recognized blackface as racist.

Cantor’s nicknames “Banjo Eyes” and “The Apostle of Pep” came from his stage presence. He had large eyes and used exaggerated expression with them, and he jumped across the stage during performances. Stylistically, Cantor had a high-pitched, whiny voice; beyond standing out, it could be heard throughout an auditorium. Despite his frenetic performances, Cantor said, “Slow down and enjoy life. It’s not only the scenery you miss by going too fast—you also miss the sense of where you are going and why.”

Cantor is especially remembered as a philanthropist. He named and helped found “The March of Dimes,” first promoting it in 1938 and encouraging people to send dimes to President Roosevelt, the most prominent victim of polio at the time.