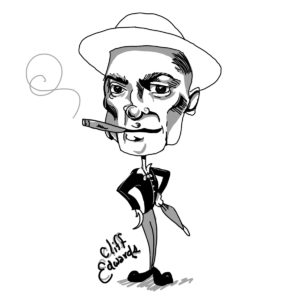 Cliff Edward’s first recording was as a kazoo player. Nearly 20 years later, his voice was immortalized as the voice of Jiminy Cricket in Disney’s 1940 film Pinocchio, singing “Give a Little Whistle” and “When You Wish Upon a Star.”

Edwards began performing as a teenager, playing in movie houses, saloons—and as a newspaper boy, where he performed to attract attention. He learned how to play the ukulele and was nicknamed “Ukulele Ike.” After the 1915 Panama Pacific International Exposition in San Francisco, the instrument became very popular, and he was among the most well-known ukulele players of the time. For the next ten years he was a Broadway, Vaudeville, and recording success, introducing the songs “Fascinatin’ Rhythm” and “Singin’ in the Rain.” He was also one of the first recorded singers to use vocables, or wordless syllables, similar to what would later be called “scat” in jazz.

After the 1920’s, Edwards’ career suffered; the ukulele went out of style, he suffered an unsuccessful attempt at a film career, and he struggled with finances and alcohol and morphine abuse. However, he still found work in film, Vaudeville, radio, and recording. In 1939 he had a small role in Gone With the Wind, and the next year he had significant success as the voice of Jiminy Cricket in Pinocchio. His last major hits were academy-award winning songs from the film.

“When You Wish Upon a Star”

“Singin’ in the Rain”