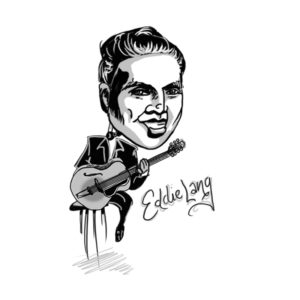 Anyone who plays jazz guitar can thank Eddie Lang; he was the first guitarist to play as a soloist, and was an influential factor in the guitar replacing the banjo in jazz ensembles.

Lang, originally named Salvatore Masso, was born in Philadelphia. He took 11 years of violin lessons, and his father taught him how to play the guitar. He and Joe Venuti, a classmate from Philadelphia, enjoyed success, playing in Atlantic City, New Jersey, and New York. Their guitar and violin duet recordings from 1926-28 are especially important to jazz guitarists and violinists. They also performed and recorded with the Dorsey Brothers, Frankie Trumbauer, and Paul Whiteman. Lang also recorded some blues records with Lonnie Johnson; they weren’t successful when he recorded as “Eddie Lang,” but when he recorded with the name “Blind Willie Dunn,” they sold well with blues audiences.

The sound of the acoustic guitar worked very well with recording technology during his career, and audiences liked his solos (usually played on a single string) and his accompanying style: chords interspersed with shorter melodies.

In the 1930’s, Lang played on the first recording of “Georgia On My Mind” and accompanied Bing Crosby after they both left Paul Whiteman’s band. He died unexpectedly at the age of 30 from complications from a tonsillectomy.