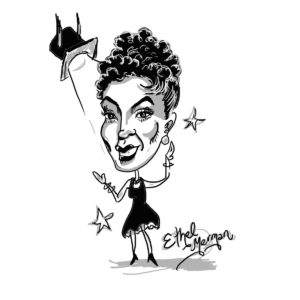 Ethel Merman said, “I can never remember being afraid of an audience. If the audience could do better they’d be up here on stage and I’d be out there watching them.” Her mother said she could hold a tune when she was just a toddler; and Merman herself said she could “hold a note as long as the Chase National Bank.” Merman’s parents were an accountant and a school teacher, so they were very concerned about their daughter’s interest in show business. They encouraged their daughter to learn a valuable skill, so she became a stenographer, but it wasn’t long before she was making enough money singing in nightclubs that she could quit her job and pursue singing as a career.

Merman was known for her very powerful voice. During this time, stage singers performed without microphones so she had a tremendous advantage over the other singers. She is associated with many well-known songs of the day, but her signature song was “There’s No Business Like Show Business.”

Merman’s greatest success was on the stage. She retired from Broadway in 1970 and looked to television and movies, but was not able to achieve the same level of success in the movie world that she had in live theater.