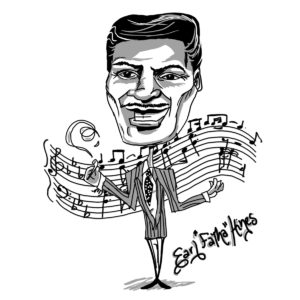 Earl Hines was a legendary jazz pianist. He had two suggestions that pertained to life and performance; “You may have holes in your shoes, but don’t let the people out front know it. Shine the top,” and, “I always challenge myself. I get out in deep water and I always try to get back. The audience never knows, but that’s when I smile the most, when I show the most ivory.” These statements were reflected in his style, which was so unique it was hard to imitate. It featured complex rhythms and melodies that sound like a trumpet.

Hines grew up in a musical family. His father was a cornetist and his stepmother played the organ at church. He originally intended to follow in his father’s footsteps, but decided that blowing on a horn hurt his ears, so he took up the piano instead. He started piano at age 9 and after three years of traditional lessons he shifted his emphasis to jazz, and by 15 he was leading his own trio. Hines describes jazz as the trunk of a tree. “After the tree has grown, many branches have spread out. They’re all with different leaves and they all look beautiful. But at the end of the season, they fold back up and it’s still the tree trunk.”

Hines’ career involved both solo work and a partnership with Louis Armstrong. Believing he had a photographic memory for chords, he said, “I don’t think when I play . . . when I’m playing the right chords appear in my mind like photographs long before I get to them.” Hines is known as the “Father of Modern Jazz Piano” and in fact his nickname was “Fatha.”

Hines explains his influences and technique